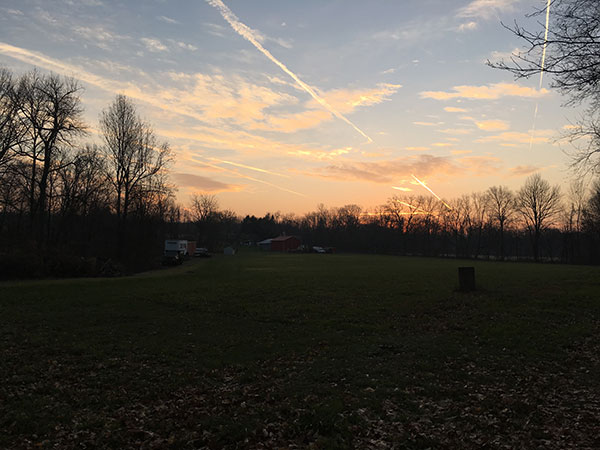 Biking from Philly to French Creek

Biking from Philly to French Creek was super fun and super challenging. I received an email from a friend a couple months ago asking if I wanted to test my butt muscles and ride bikes from Philly to French Creek for a weekend to stay in a cabin. This was something I had been wanting to do for quite a while and was really excited to do so with 3 other badass ladies. We started by getting together a gear list and planning our route. December in Philly usually averages 30-50 degree temps but we couldn’t have gotten any luckier with the weather. It was in the mid-60s and sunny, perfect for a long ride.

We left Philly around 8:30am on Friday morning which, looking back, we probably should have aimed for a little earlier with the sun setting so early. We hopped on the Schuylkill River Trail at Spruce Street and took that to Kelly Drive. It was great once we got past Manayunk with the trail being pretty much empty. Our first break was in Norristown after a few hours of riding. The train station was a great stop with a decent public bathroom. The route so far was so flat and I was feeling great!

Next, we stopped in Phoenixville at Iron Hill Brewery for lunch which may have been a little more leisurely than we intended. An hour and a half and a beer later we were back on the road. We were following Google maps which seemed to be a little confused about which trail we were supposed to be on so after riding in a couple circles we were back at it.

Our next destination was Pottstown, we had planned to stop at a grocery store there but were starting to feel a bit worn out by this point. Even though Phoenixville was a little more than halfway, there were some hills we needed to climb after which started to make it feel like we were even further away. Rite Aid was closest and worked for us. We jammed our panniers full of pasta, jerky, granola bars and nuts and continued on. There are two ways to enter French Creek State park, the north side and the south side. We entered on the north and were faced with some serious hill climbs. I felt like we were heading up a mountain at one point. We were really losing steam (and light) and I was having trouble walking my bike up the hill. Did I mention I thought it would be a good idea to ride my single speed road bike? Not one of my best moves. My overpacked panniers felt like they added 100 lbs which didn’t really help. The last hour was seriously challenging and I was cursing myself for feeling so unprepared.

We finally arrived a little after 6pm and it was pitch black. The temperature had dropped about 20 degrees and a crazy fog had rolled in. Once we were off the main roads and out of danger (people drive like real jerks in that area) it was fun to ride into the park with only a headlamp to see a few feet in front of us. We rode to the cabin (up even more hills) and walked into so much warmth feeling so accomplished. This was the longest ride I had done and was so glad we had decided to do it. The cabins are great, fully equipped with a shower, a full kitchen, microwave and hot, running water. We broke out some whiskey and wine and played games.

I unfortunately had to leave earlier than the others and headed out Saturday morning. It was another beautiful day and I opted to leave on the south side and take 23 E back to the trail. The hills were much more gradual and the ride was really pretty through mostly farmland. If I did this ride again I think I would have chosen to take this route there. Without the Pottstown detour and pit stop in Phoenixville I was able to make it back to Philly much quicker. The trip out there ended up being 62.7 miles with the ride home being 43.7. Our average speed out to French Creek was 9.8 mph and my average speed home was 12.2 mph. We had just under 6.5 hours of ride time out there with just under 4 on the way back.

I learned a ton from my first bike camp trip. I needed about half what I packed, just because there is room in your bags doesn’t mean you need to keep filling them.. I would have looked at a the route a little closer and paid more attention to elevation levels both ways. If you’re considering biking from Philly to French Creek I would definitely recommend it and can’t wait to plan my next bike camp trip ASAP!